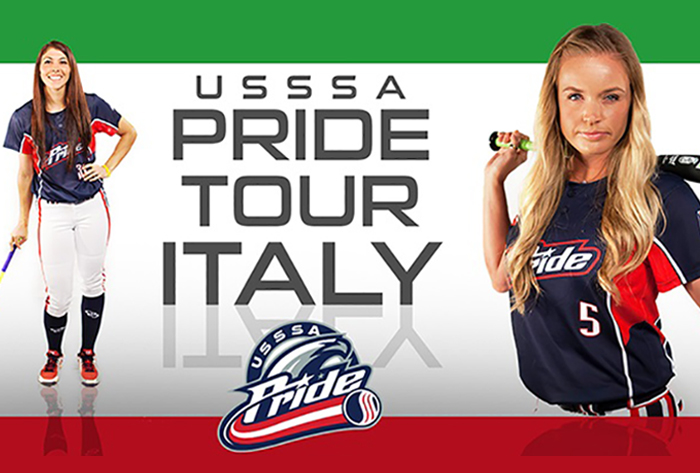 Kissimmee, Fla. -- USSSA is returning to Italy this May. The Pride will arrive in Rome on May 1 to participate in a four-game exhibition series against the Italian Women’s National Team, while also running a few coaching clinics in the process.

USSSA has continuously strengthened their presence internationally on the baseball side, making its mark in the European baseball market and USSSA Fastpitch has been following suit to strengthen its own international ties.

USSSA Pride third baseman, Andrea Duran, was among the six Pride players who traveled to Italy this past August to not only participate in the clinics, but ultimately promote the sport of softball as well as the NPF in and around Milan.

“The clinics we hosted last August went really well," said Duran. "I was impressed by the talent of the girls and I was even more blown away by their eagerness to learn. They were all very coachable and committed to work hard for us every day.”

Clinics this May during the Italian Tour will feature hands on experience with local Italian coaches since the young players will be in school. Coaches will be instructed on practice routines and warm-ups the Pride players use themselves to prepare for the NPF season and hopefully learn some new techniques to implement year-round.

The USSSA Pride Italian Tour will kick things off in Montegranaro and make their way to Parma, Verona and end their trip in Milan.

The full roster has not been released as of yet, but Megan Willis will take the role of coach against the Italian National Team, the same role Willis took during the Pride Fall Tour back in October.

“I think this trip to Italy is going to be amazing for everyone involved," Willis said. "The softball games are expected to be hard fought contests, and the coaches’ clinics should be amazing with an overwhelming amount of information.”

The USSSA Pride's four-game series against the Italian National Team will take place May 2-5.

Not only is the experience an exciting one for USSSA, the Italian National Team has a chance to get back together and play top competition in preparation for this summer’s World Cup. Eager to play against the best, the International Softball Federation has made the decision to pause their season so that their national team players can compete in this exhibition series.

This is not the first time NPF players have made their way abroad; many NPF players have chosen to extend their three-month NPF season by joining the Japan Softball League. The biggest difference, apart from location, is that the Pride will be representing USSSA as a team.

The tour in Italy provides the Pride with a chance to put their own pre-season work in and face the top ranked team in Europe before the NPF season starts in June. USSSA is following the trend many professional sports leagues have executed such as the MLB in Australia and the NFL in London. Following the tour, USSSA will be responsible for the NPF in Italy.

Megan Willis, who has hosted a few clinics in France is no stranger to the European softball scene and hopes to strengthen USSSA’a relationship with European teams and players.

“It's my hope that bringing the Pride to Italy will not only showcase our team’s talent, but also introduce the NPF" said Willis. "One reason baseball has been able to grow as a sport in Europe is with the help of MLB players. Being able to have that title and educate young athletes as well as coaches is huge.”

Andrea Duran also brings a perspective few can to the international game, participating in the 2008 Olympic games not to mention several World Cup Championships.

“I think it could be a very positive experience that brings us all closer," said Duran "It is also a great opportunity to represent USSSA and to give back to the sport. The games in May are hopefully just the stepping stones to an even greater future in Europe that I am so grateful I got to be a part of.”