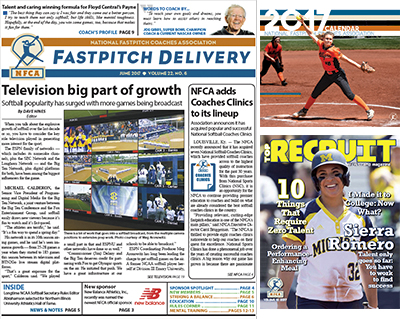 The NFCA produces a number of publications throughout the year to serve its members and the softball community.

The NFCA's monthly member newspaper, Fastpitch Delivery, is one of the nation’s best softball publications. It was first published in December 1995. Each issue includes feature stories on coaches, instructional coaching articles and news of the game..

A printed or electronic subscription to Fastpitch Delivery is included with full NFCA membership. Members also have exclusive online access to current and past issues in their respective Coach's Box. To gain access, members should login on the home page of this site and then click on Coach's Box.

In 2006, the NFCA began publishing Top Recruit, an once-a-year magazine focusing on the college-bound softball student-athlete. Throughout the years, it has become a top resource for players, parents and youth softball coaches. NFCA members who sign up for the Camp Network can receive free issues of the current year's publication for their campers. It is published each April.

To see past issues of Top Recruit, click HERE. NFCA members who sign up for the Camp Network will receive a free electronic issue of the current year's publication for their campers.