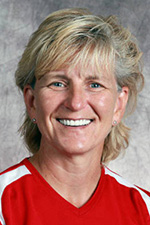 Rhonda Revelle, a 2010 NFCA Hall of Fame inductee, returned to her alma mater in 1993 and returned the program to its perch among the nation's elite. Entering her 27th season in 2018, Revelle owns nearly every Nebraska coaching record. With 968 victories at Nebraska, Revelle has won more games than any other coach - male or female - in the history of Husker Athletics. Her three-year past president term began in 2017 after serving as the Association's President for the third time.