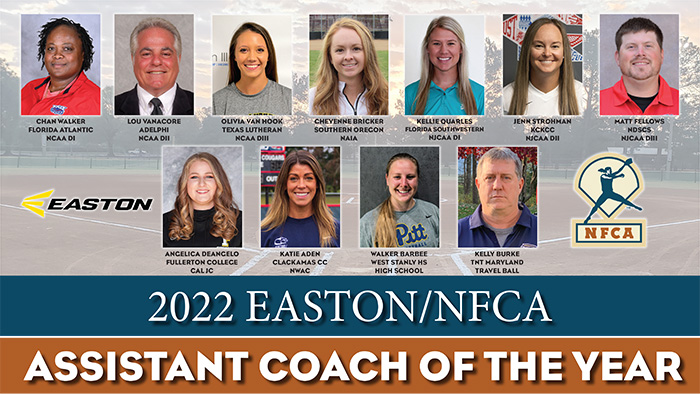 LOUISVILLE, Ky. — Eleven member coaches were honored as 2022 Easton/NFCA Assistant Coaches of the Year, the Association announced on Thursday afternoon.

These awards salute the efforts of coaches from the various NFCA membership categories for their tireless dedication to the sport of softball and to the continued education, growth and development of young women, both on and off the playing field. The winners will be recognized on Dec. 10 during the NFCA Convention's annual Awards Brunch.

Walker was tabbed interim head coach following the passing of the legendary Joan Joyce, who she was beside in the FAU dugout for the past 21 years. The veteran coach steered the Owls to their first Conference Championship Tournament appearance since 2018, following a fifth-place regular season finish (picked 12th in preseason poll). Additionally, FAU posted 29 victories, the most since 2018. Walker was the glue that held the program together when Joyce entered the hospital just days before opening weekend. According to Christina Sutcliffe (FAU alum/Northern Illinois head coach), the team’s success and resiliency is a credit to Walker and her ability to rise above adversity. She always led with integrity and grace with her players at the forefront of everything she does.

Vanacore, whose primary responsibility is working with pitchers and catchers, has mentored three NFCA All-America pitchers, the first three at that position in program history. The success of pitchers over the last three seasons is a credit to Vanacore and his dedication the program and the sport. Additionally, Vanacore was the only Adelphi assistant and was heavily involved in all aspects of the program, including scouting, recruiting and pitcher & catcher workouts. Adelphi head coach Carla Campagna, who has known Vanacore for 20 years, states Vanacore (a part-time assistant), deserves to be recognized for the thankless time and commitment to not only her, but to the Adelphi program and family.

Van Hook served as Texas Lutheran’s top assistant the past four seasons, while also working as the Athletics Facilities Director. Helping in every aspect of the program (no decision was made without her input), Van Hook played a pivotal part in the TLU’s 2019 national tile, 2021 runner-up finish and a third-place showing in 2022. Over her time, the Bulldogs were 140-21 overall and 66-1 in conference play. She was part of the 2019 NFCA Division III National Coaching Staff of the Year and three NFCA Regional Coaching Staffs of the Year. According to TLU head coach Wade Wilson, Van Hook was the epitome of an assistant coach, who was loyal to the players, university and coaching staff. Knowing Van Hook since she was eight, Wilson states having her on staff was a blessing. She was nothing short of fantastic and never had a bad day.

Bricker joined the program in 2017 and Southern Oregon has reaped the rewards, posting a 253-58 mark, capturing two national championships, along with two more top-five finishes at the NAIA Softball World Series. Taking on more responsibilities the past two seasons, Bricker works heavily with pitchers and catchers, programming bullpens for the pitchers, while also taking on the pitch-calling duties. She handles all recruiting communications, programs the team’s strength and conditioning, produces scouting reports, coordinates alumni relations and runs fall/summer camps. In addition to coaching, Bricker has taken on the duties of the eligibility coordinator in the athletic department.

Quarles has been on the FSW bench for consecutive NJCAA Division I National Championship runs in 2021 and 2022 with the most recent seeing the Bucs post a 55-6 overall record, 20-0 in Suncoast Conference play. Serving as the hitting coach, FSW had one of the NJCAA’s most potent offenses, with a .396 batting average, while scoring almost nine runs per game against one of the toughest schedules. She tutored three NFCA All-Americans and the Suncoast Conference Player of the Year. Quarles also impacts the program off the field, handling team academics and serving as the sponsor for the campus Fellowship of Christian Athletes group.

An integral part of the KCKCC program, Strohman helped guide the Blue Devils to a seventh-place finish at the 2022 NJCAA DII National Championship, following a District B title. Working with the hitters and outfielders, Strohman tutored a pair of first-team NFCA All-Americans. She is the sole person in charge of the softball complex as well as the academics from study hall to grade checks. Due to her diligence, the team has continually been top program in the athletic department as well as a top-10 finisher in the Easton/NFCA Team GPA awards.

Fellows was the top assistant in 2022 after five seasons as a volunteer assistant. His hard work played an important part in turning NDSCS into a winning program, making the NJCAA DIII National Tournament three times in the last four years. The 2022 squad finished 39-12, went 2-2 at the national tournament and captured a Region XIII title. Fellows’ work on the defensive side of the ball has seen the infield turn into a solid unit.

DeAngelo serves as both the catching coach and the strength and conditioning coach. She assists in all aspects of the game, and this past season, stepped in and handled all the academics and study hall for the team. According to head coach Speedy Mendoza, DeAngelo will do whatever is needed make the program better and is always available to the student-athletes during her off time, because it is important to her to let the team know she will always be there for them. She is smart and knowledgeable about the games and always fills in where she is needed.

Aden serves as the primary outfield coach, and covers hitting and baserunning. She oversees the weights and agilities program, monitors grade checks and study halls, while also taking part in recruiting, field work, fundraising and community outreach. According to head coach Jessica Buehl, Aden is loyal, driven and devoted to her student-athletes. The success of the program is directly related to the effort and pride she has put into the program.

Barbee is the program’s primary hitting instructor and works with the catchers, joining the program immediately following her collegiate playing career at the University of Pittsburgh. A collegiate catcher, Barbee instills her knowledge with the West Stanly catchers, honing their skills in the areas of blocking, relays/cutoff and throw downs. She also serves as the third base coach, calling all offensive signals and contributes to field maintenance. Her work helped lead the team to a conference, regional and state title in 2022. Head coach Emily Smith believes Barbee was an invaluable member of the coaching staff and was willing to do the small thing throughout the season to help prepare the team to be in the best possible position to be successful on the field.

Assists with the 18U Gold team and then stepped in this past year with the 10U program. He has helped the 10Us successfully develop and move up an entire class over the course of the fall and spring seasons, developing into a strong competitor in the Mid-Atlantic region. Burke also runs his own software platform for events and team registrations, which came about from him recognizing there was a need for it to help the softball community become more of a collective, taking a risk in order to make this happen for the community. Dedicating all of his time to the growth and leadership in this great sport, Burke, according to Meredith McAlister (TNT U18 Gold), is in it for all the right reasons. She respects the dedication and humility he has shown and he is respected for the decisions he has made to make their programs better in the long run.