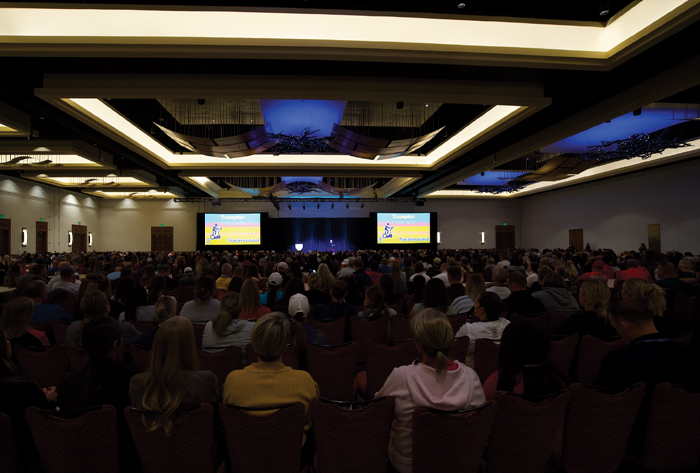 Drohan welcomed attendees and focused on the commitment to being good to each other and it will elevate us all. Bruggeman’s address to attendees touched on transformation. Transformational a word used often in athletics. The sport of softball and the NFCA have made 'transformational' changes over the last few years, which have led to unprecedented growth.  Bruggeman featured this growth, highlighted Convention programming, and challenged coaches to 'reach new heights' in San Antonio Hill Country at this Convention.

Candrea focused on speaking up and fighting for softball, creating and cultivating a village and maintaining a balance in coaching, while also emphasizing the amazing growth of the game.

Along with the previously mentioned “First Pitch” Opening Welcome, first-time attendees were treated to a Rookie Orientation presented by Triple Crown Sports in which a panel of veteran coaches take attendees through the jam-packed schedule and highlighted must-attend events. Several of the NFCA’s committees met in the afternoon and evening to discuss current and future business, while preparing for the premier business event (Divisional Caucuses) on Thursday.

The evening was capped off with an evening of socializing at the NFCA Opening Reception.

View the complete schedule HERE or download the Convention App to see a complete list of activities.

Prior to the official opening, NFCC 403 (Position Play & Individual Defense) and 410 (Winning with the Battery) classes concluded with coaches completing their course work en route to obtaining certification to be a Four-Star Master Coach. Those were followed by two three-hour Pre-Convention seminars – Creating a High-Powered Offense and Thriving in this Profession: Proactive Coaching for Today’s Athletes.

Additionally, the always popular mentoring session and two sponsored social events in the Happy Hour presented by LeagueApps (Exhibit Hall) and the Diamond/PGF Social at the Forum Plaza.

Be sure to check out the Exhibit Show, which opens its doors to members at 11:00 a.m. and runs through 6:00 p.m. In conjunction with the Exhibit Hall, the digital auction started Dec. 1. It is an opportunity to snag great deals on equipment, technology, gift certificates and more. Bid on your favorite items through the NFCA App (Convention Attendees only) from your phone at any time. Bidding closes at 9 p.m. on Thursday.