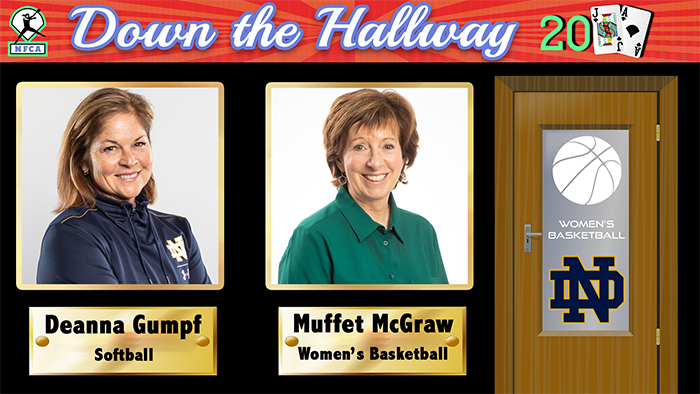 LOUISVILLE, Ky. – The NFCA is bringing back one of its most well-received sessions from last year’s Virtual Convention, but this year it will be in person. Legendary University of Notre Dame women’s basketball head coach and Naismith Hall of Famer Muffet McGraw will be a featured guest at the 2021 Convention as she takes the stage for a live “Down the Hallway” in Las Vegas.

McGraw, who retired following the 2019-20 season, will be joined by Irish head softball coach Deanna Gumpf on Thursday, Dec. 9. The session pairs Gumpf, who is entering her 21st season at the helm of Notre Dame, with her longtime coaching peer and colleague McGraw as they share with attendees an inside look at how the nation’s elite coaches approach different areas of their programs.

The programming is geared to encourage coaches throughout the country to go “Down the Hallway” and collaborate with their coaching colleagues no matter what sport they coach.

The 2021 NFCA National Convention is being held Dec. 8-11 at Caesar’s Forum in Las Vegas. For more information and to register, click on the links provided.

The 13th female coach inducted into the Naismith Memorial Basketball Hall of Fame (2017), McGraw became the fourth-fastest coach to reach the 900-win milestone. She is one of just five NCAA Division I men’s or women’s basketball coaches with a least 930 wins, nine Final Fours and multiple titles, joining the ranks of Pat Summitt, Tara VanDerveer, Geno Auriemma and Mike Krzyzewski.

McGraw has steered her squads to 31 20-win seasons, including 11 30-win campaigns with 174 of those victories coming against ranked opponents. Along with the nine Final Fours, she has seven national championship game appearances, 17 Sweet 16 trips, 67 NCAA Tournament wins and ended her career with 24 consecutive NCAA tournament appearances.

More About Gumpf
Entering her 21st season as leader of the Notre Dame softball program, Deanna Gumpf has guided the Irish to NCAA Regionals every season (excluding 2020), claiming four conference tournament titles during that span. Even more, Notre Dame staked claim to the BIG EAST Conference’s regular-season championship during her first four seasons on the bench (2002-05). The Irish hoisted BIG EAST regular-season hardware again in 2010, 2011, and the program’s final year as a conference member in 2013 before transitioning to the Atlantic Coast Conference prior to the 2014 campaign.