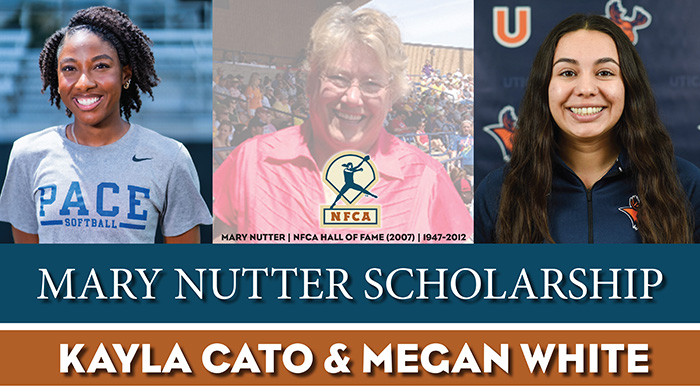 Cato is in her fourth season with the Knights’ softball program and also serves as the program coordinator for the Northside Youth Organization (NYO) in Atlanta, Ga. With NYO, she organizes a high volume of youth sporting events, coordinating all related logistics to deliver successful events and positive experiences for the athletes. Additionally, Cato provides hitting and defensive lessons to youth players in Atlanta.

“Kayla continues to grow the game and it would a great opportunity for her to learn from the best,” said Selena Collins-Patterson, head coach at Pace Academy.

White, a graduate assistant, was hired this summer after a four-year standout career at Skidmore College. A 2022 NFCA All-American and Liberty League Player of the Year, White graduated with a B.S. in Health and Human Physiology. According to Utica head coach Rinae Olsen (White’s collegiate coach at Skidmore), White is fully committed to the Utica softball program and coaching, coming into the office every day ready to work and learn, all while working towards her master’s.“

“Megan is not only going to be an exceptional coach, but she is an exceptional human being,” said Olsen. “She has the desire and passion to learn and grow the game more than anyone I have ever met. Megan is extremely selfless and willing to do whatever it takes to make herself and others better.”

Cato and White will be recognized on Thursday, Dec. 8 during the Convention’s annual mentoring workshop.

The NFCA (National Fastpitch Coaches Association) is the professional organization for fastpitch softball coaches. Known for its highly-regarded coaches scholarship program, the NFCA also educates and supports softball coaches on a variety of different levels: from webinars to legal counsel, to in-person events and the National Convention.