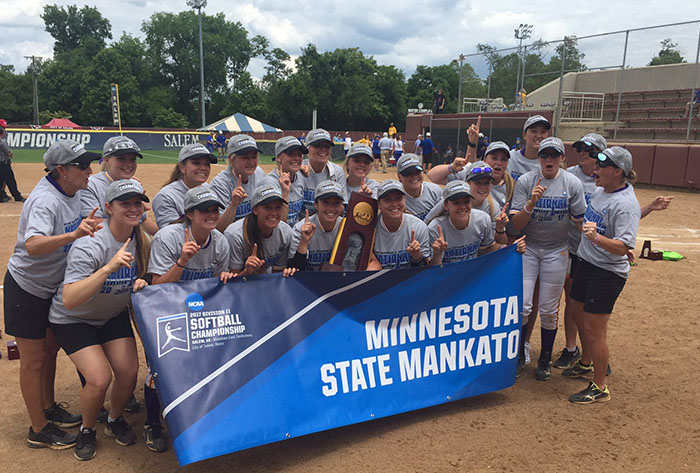 Senior pitcher Coley Ries (41-3), who was named Most Outstanding Player, closed her Maverick career with a 14 strikeout performance in a complete game three hitter. The Schutt Sports/NFCA DII National Player of the Year struck out two batters each innning and finished with 476 this season and 1,481 for her career. Angelo State senior Kenedy Urbany (21-2) suffered the defeat 3.0 innings. Junior Morgan Hill finished the game for the Rambelles with three strikeouts in 3.0 innings of work.

Ries got out of her first jam in the second inning, but struck out the final batter to work the Mavericks out of the early jam. She went on to strikeout five of the first nine batters faced.

Minnesota State got on the scoreboard in the third frame after senior Ashley Thell drove her 16th double of the season to center field, knocking in sophomore McKenzie Paap. An inning later, senior Samantha Buhmann smashed a leadoff double to left field. Freshman Carly Esselman then dropped down a bunt allowing Buhmann to get home after an Angelo State error increasing the Mavericks lead to 2-0. The big inning continued as Esselman scored scored on a fielder's choice to stretch the edge to 3-0.

Angelo State tried to rally in the sixth frame as Urbany delivered her 16th home run of the season over the right field wall to pull within two runs, 3-1. Minnesota State retaliated in the bottom half adding insurance runs after junior Jess Meidl dropped a RBI single into left field scoring junior Alyssa Rickels and sophomore Cori Kennedy for a 5-1 advantage.

Minnesota State totaled nine hits as a team while Angelo State posted three. Esselman and Rickels set the pace with a game-best two hits each.